Are wind and LNG in a race to the bottom?

Keeping a close eye on the key indicators of which way the Industrial Energy Transition is moving sees that LNG and wind are now intertwined – and that’s a problem for LNG.

How are the chips falling?

KBC's Energy Transition Manifesto sees two potential scenarios for how the energy transition will develop. Evolution not Revolution – a relatively orderly transition leveraging much of the fossil energy asset base, and Plausible Disruption – a more disruptive change driven by economics of electrification vs fossil energy.

We are keeping a close eye on some key indicators to help see which way the world is moving, those indicators include regulation, investment behaviour and price evolution.

On Sept 21st Tellurian and Petronet announced a major deal to purchase 5 mtpa of LNG from the planned Driftwood LNG facility in Louisiana. The interesting thing about this is the rumoured price - $4.50/MMBtu* 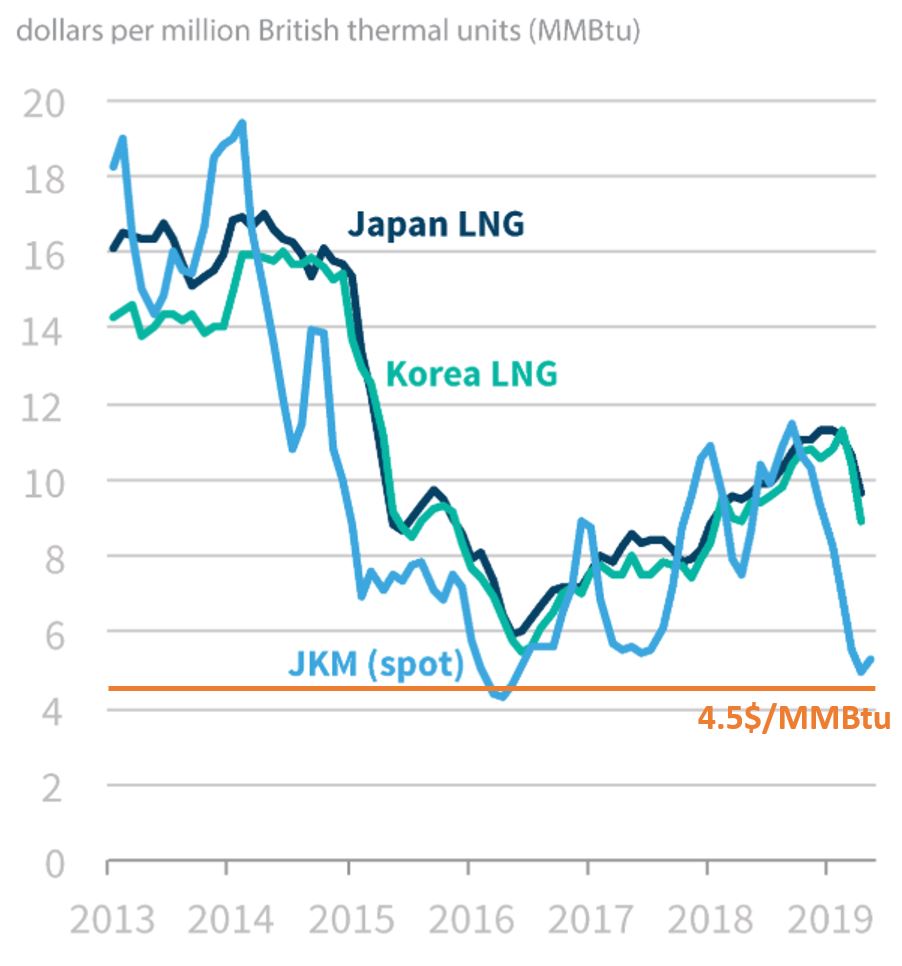 As Figure 1 shows, that's a historically low price. Often offtakers will pay a slight premium in return for security of supply, then claw some back by taking an equity stake, but here we are looking at a new industry benchmark for low cost LNG.

Meanwhile, in the UK, an offshore wind CfD auction came in at $50 /Mwh. Whilst there are onshore wind and solar projects with a lower LCOE, this is a major step down in offshore wind prices – and there were multiple bidders in that ballpark suggesting this is not an aberration. At these prices UK offshore wind will likely be paying into government coffers rather than receiving subsidies - £40 per Mwh is below the typical grid price for the last decade as can be seen on figure 2.

LNG and wind now intertwined – and that's a problem for LNG

What does an India-US LNG deal have to do with UK wind auctions? Firstly, in an oversupplied market, global LNG prices have more or less converged.

As the transition line shows, the 4.5 $/MMBtu is just about on the limit for gas fired power to compete economically with offshore wind – this suggests these low LNG prices need to become the new normal if the LNG sector is going to grow as anticipated. For reference we also show the JBC energy 2025 LNG price forecasts – expected to be slightly higher than the $4.5 $/MMBtu mark

Taken together with the prices for onshore wind and solar PV, which are lower than offshore wind, it suggests by 2025 all regions except the US will be firmly into the transition region that favours electrification as a route to decarbonisation.

Race to the bottom

An overlooked facet of the energy transition is that energy will potentially get much cheaper. This is good for the world economy, not so good for energy companies. It appears that that LNG and Renewables are in a race to the bottom, but in my opinion LNG has less room to reduce – at $2/MMBtu in the US a vast amount of gas is flared since it's uneconomic to recover it, whereas the trends show that wind and solar seem to have a good way to run. This leaves the LNG industry with a stark choice between a smaller market at high prices or a large market at prices low enough to compete with renewable power. If history is any guide, my bet would be overinvestment and a lower for longer buyer's market for LNG.

These announcements are only a nudge in the direction of ‘Plausible Disruption' and more are needed for a firm direction. However, some step change choices can to be taken now allowing you to be optimum whatever the mid 2025 economics.

When speaking to leaders in the energy and chemical industry there are three questions that define the conversation. They are keen to know the challenges of digitalization, what's the most disruptive change and what's new. Our Head of Asset and Digital Transformation gives his view.

The right decisions in abnormal situations

Do you have an accurate representation of your plant to drive the right decisions in your organization at this critical time?

With an increased awareness of digitalization, the pace of business’ digital strategy is accelerating. Digital Twins are becoming core to business success and will drive operational excellence and give an organization’s single point of “truth".

Get the latest updates from KBC

Sign up to our newsletter to receive our latest innovations, viewpoints and be informed about any upcoming events.